ON WHAT ARE OUR CONCLUSIONS BASED?

In 1983 when my school opened, I didn’t know much about the world of adult swimming lessons except that many adults were failing to learn to swim. They were afraid in water.

By asking the question, “How Does Fear Work,” and receiving The 5 Circles diagram in response, I had a direction. By explaining it on Day 1 and hearing my students say, “Why didn’t anyone ever tell us that?” I was encouraged. By using it, then adhering to it, then making it the whole focus of all my teaching, I had success with every single student. Everyone made progress, much to their surprise. Yes, I would get the occasional (1 in 100) person who was so accustomed to traditional lessons that all they wanted to hear was “arms and legs,” as I call it. So I would give them arms and legs and say to the other students, “I don’t subscribe to this. Please don’t listen. This will not work for you.” They understood. 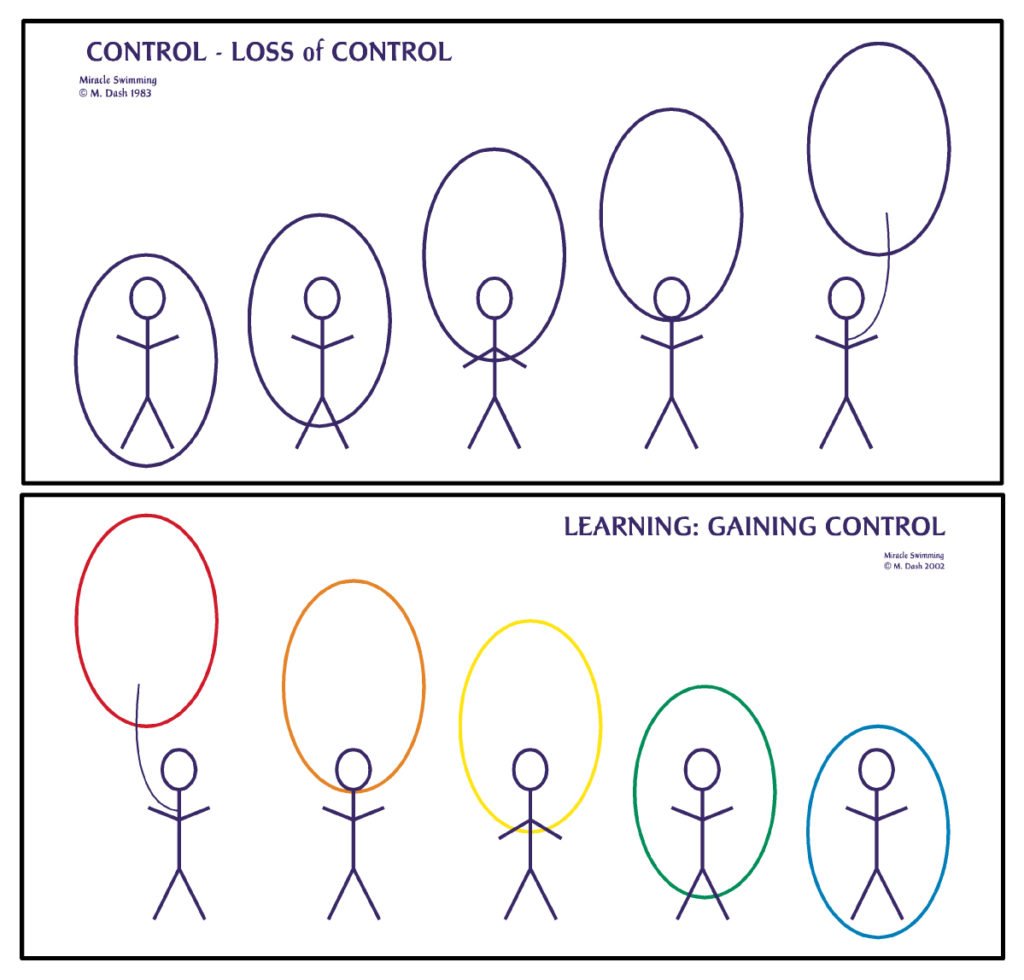 “You’ve helped me so much, from a whole country, continent, and ocean away.”

Class after class, year after year, 100% of my students had breakthroughs unavailable in their previous traditional classes. The universal story was, “My instructors didn’t have an answer to my fear. ”

By listening to their fears, by not wanting to hurt them, by finding a thousand ways to use The 5 Circles for everything that came up, a thread became a rope and the rope became a ladder to freedom out of fear. The students’ comments, which can be read at Students Comments, were universally incredulous.

Success was so simple. Over thirty-seven years, my classes have provided solid evidence for these conclusions:

Conclusion 1: The reason adults fail to learn to swim is fear.

Since virtually every student in my classes made progress, overcame fear, proclaimed their astonishment, expressed seeing the light at the end of the tunnel, and said they’d never taken any class like it before, I concluded two things:

Conclusion 2: Learning strokes is not learning to swim.

What adult non-swimmers want most is comfort. They’ve tried hard to master “arms and legs” in previous classes or with friends and family. It never led to satisfaction. They say, “I just want to be comfortable. I don’t need to be an Olympian.” When they become free in the deep end, they say, “I can swim!” even though they don’t know the first thing about freestyle or any stroke. They’re right.

Think about kids. When Johnny becomes independent in the backyard pool, his parents say, “Johnny can swim. Well, he can’t swim, but he can swim!” They mean he is reliable for his safety in deep water, but he doesn’t know strokes yet. This described my students. They were telling me they could swim. This made sense: they were safe. If they say they can swim, and they’re the ones who said they couldn’t before, who are we to disagree? Isn’t knowing how to swim all about safety? Learning strokes is something extra. It’s the efficient way to swim, but it isn’t knowing how to swim. The world needs this key distinction in order to be successful teaching ALL people to swim!

Conclusion 3: Swimming lessons ran aground when competitive swimming took them over in the 70s or 80s.

What happened to swimming lessons that made them focus on efficiency instead of safety? Was it always that way? If you study the history of swimming lessons, you may find what I did: in the early 1900’s, the men who created the first swimming curricula believed that learning to swim was learning safety AND strokes. Safety was a priority. They taught children and developed curricula for children. If they taught adults, the curriculum used was the same. Apparently they didn’t teach afraid adults because there is no curriculum for them. OR, they believed that afraid adults should be taught like children. I believe it’s safe to conclude that they didn’t teach adults, because most adults who can’t swim are afraid. By 1940 or so, drownings had been significantly reduced even with “Learn-to-Swim 1.0”, which had its bugs.

In the 1980s, in the race to produce the best swimmers in the world at the Olympics, swim coaches and competitive swimming leaders reasoned that in order to develop the most powerful and vast pool of swimmers from which to draw our elite swimmers, coaches would take charge of the curricula and teach swimming lessons in their communities. Suddenly, there were three national instructional entities instead of two: the Red Cross, the Y—which borrowed the Red Cross program—and Swim America by the American Swimming Coaches Association. Swim America put goggles on three-year-olds and taught kids of all ages strokes if they could. The goal was to teach them efficiency from the get-go to get a jump on speed and competition.

Parents were attracted to the idea of their kids being taught by “experts” in swimming, like coaches. The traditional instructional agencies modified their teaching to be more like that of the competitive programs. Efficiency replaced safety. Kids were graduating from lessons by swimming from here to there rather than proving that they could be safe in water over their heads, resting in the middle. Now we have at least one generation of adults who cling to the side in deep water who say they “learned to swim.” They are not safe in deep water: therefore they cannot swim. This is the way swimming is being taught these days. Not every last teacher teaches this, but it’s the norm.

Conclusion 4: Adults should not be taught lessons designed for children.

Afraid adults fail children’s lessons because those lessons don’t accommodate adults’ thinking, or address fear. Adults who are not afraid should be in the separate classes from those who are.

Conclusion 5: Any adult who can’t swim is afraid.

Based on the distinction made above, adults who are not afraid in deep water (once you put them there) can swim; they may not know strokes, but they’re safe, so they can swim. Adults who are afraid are those who don’t know how the water works and don’t know how to prevent panic, therefore they haven’t learned: they can’t swim.

Conclusion 6: We have the best lessons in the world for afraid adults.

I asked myself, Aren’t I doing the same thing anyone would do? Aren’t I doing the same thing others are doing? Am I doing something no one else is doing? Why are people driving so far to take this class? Why are people flying from 50 states and 17 countries to take this class? If someone is teaching adults this well in other places, wouldn’t I have heard about it? Wouldn’t my graduates, friends, and family tell me if they read about it somewhere?

Miracle Swimming graduates around the world, friends and family have always told me who they saw on TV who came out of the closet as afraid in water! They’ve always sent articles in local or major papers featuring adult swimming lessons for afraid students. People in over 70 countries have bought my book and DVD. They tell me their instructors “are kind and patient, but they don’t know what to do with me.”

Wouldn’t great swimming lessons make the news, as ours have? If I haven’t heard of any others and no one has told me of others, is it a sound conclusion to draw that what I’m doing is the best work for afraid adults out there? I can’t be absolutely certain. But I can lean in that direction.

The Miracle Swimming Movement is the fast track to the end of panic and therefore, the end of accidents and drowning. Imagine.

Yes, you can be free in deep water. Get started from the comfort of your living room or back yard pool.